Government Cloud: How Local Governments Can & Should Use the GovCloud 2022 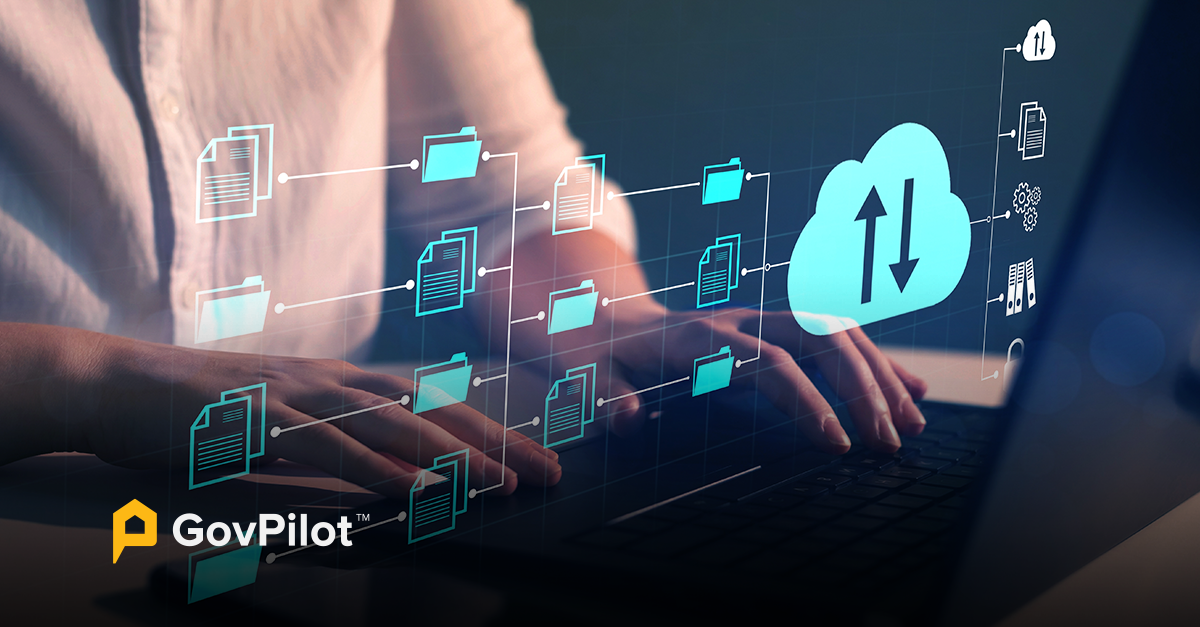 In recent years, you’ve probably heard the term, “the cloud” being thrown around pretty often. Yet, if you’re in a local government that still uses paper-based workflows or an in-house server-based computer system for storing government data, you may not truly understand what the cloud is or what the technology means for localities.

In this guide, you’ll get a clear definition of the government cloud as well as information about some of the many benefits it poses for your local government. Read on to learn more.

What is the GovCloud?

The GovCloud (short for Government Cloud) is government computer systems that store data over the Internet rather than a physical data server. Data stored in the cloud can be accessed and submitted from anywhere, unlike local servers that require you to be on site to file, store, and access documentation in-person.

For local governments, this poses a serious opportunity to let government officials fill out and access paperwork in the field.

What Are the Benefits of the Government Cloud?

Government officials are constantly out and about. From inspections to emergency management to code enforcement to public works projects, the cloud allows government officials to record, store, and access critical data from a computer or cell phone.

Here are the benefits in detail that GovCloud poses for local governments:

Government documents will be filed online and automatically stored when you make the switch to the government cloud. You’ll have

GovPilot has embraced the Microsoft Azure cloud and has brought on former Microsoft Development Manager from Microsoft Robin Smith as Chief Operations Officer to maximize cybersecurity for local governments. When you embrace the GovCloud, onboarding processes include training on the best cybersecurity protocols and how to avoid phishing scams and other notable hacking tactics.

The GovCloud allows you to make forms like license and permit applications, business registration, document requests, and more accessible directly from your local government website. While community members previously had to file paperwork in-person during office hours, the government cloud allows them to file anytime, anywhere. The relevant public officials are notified upon submission on an application and can approve or deny the request in a remote capacity as well. If the application is denied, your officials can send a written message instructing the citizen on what they need to do to get approved.

5. Pull Up Property Records in Seconds

Whenever a permit or license request is submitted, a code violation is issued, an inspection takes place, or any other government interaction occurs at a specific address in your neighborhood, the GovCloud automatically stores the property records. With intuitive GIS mapping, local government officials can pull up the full set of records for any commercial or residential property in your jurisdiction in a matter of seconds.

Learn more about How to Use GIS Maps in Local Government.

Many local governments continue to use paper filing systems that are disorganized, inefficient, and without regular data backups. This approach results in countless wasted hours by officials at all levels spent looking through storage bins. And your records could be swept away in seconds with one devastating natural disaster in your neighborhood.

Learn more about the Benefits of Going Paperless in Local Government.

Government officials need to understand the public’s perception on how your locality is doing and which issues that matter most to them. Complaint management software allows citizens to file non-emergency complaints with your local government anytime via a simple mobile app. The complaint is then stored in the GovCloud and made accessible to the specific department(s) that the issue at hand pertains to. Tasks like infrastructure maintenance will then be scheduled to the public works department and / or other relevant departments, and government officials can message the complainant with any follow-up questions or status updates.

Pro Tip: Encourage constituents to use the GIS mapping feature of your cloud complaint management platform. When a citizen notices an issue like a pothole, flooding, etc. they can drop a pin at the exact location of the issue for your government’s reference.

Local government leadership needs to use concrete data for strategic planning and capital improvement planning. The collection of real-time data and automatic pulling of that data into intuitive dashboards and reports will highlight:

How to Transition From Old Data Storage Systems to the GovCloud?

While this technology may sound complicated for those accustomed to old fashioned data storage methods, making the switch truly is simple. When you go digital, a GovPilot onboarding specialist will come on site to help you

Beyond onboarding, you’ll have more efficient workflows, insightful reports and dashboards, and cybersecurity alongside data back-ups by switching to the cloud. To learn more about GovPilot, book a free demo.

What is the Government Cloud?

The government cloud (often abbreviated as GovCloud) is cybersecure, Internet-based data storage for public sector entities. Unlike disorganized paper-based filing and less secure in-house computer servers, the GovCloud makes it easy for government officials to remotely access documents online in just a few clicks. Data in the cloud is backed up on a regular basis, to ensure that your sensitive data will always be accessible.

Government Cloud vs Paper Filing: Which is Better for Governments?

Paper-based storage is a disorderly, inefficient, and unsecure approach to government data storage. While many governments continue to use this antiquated approach to store documents simply because it’s the status quo, these localities are wasting thousands in taxpayer dollars a month in paying officials to sort through various files and cabinets to track down a particular document. And, if something like a fire or flood strikes city hall, your paper records could be lost forever.

Documents are stored and filed online with the cloud, meaning relevant government officials will have automatic access to relevant paperwork and can access it in just a few clicks. Plus, you’ll never have to fear the total loss of government documents with regular data backups.

Government Cloud vs In-House Servers: Which is Better for Governments?

Many local governments use on-site servers for managing their computer systems. This system is considered antiquated compared to the government cloud. The cloud makes documents accessible from anywhere, meaning government officials can work from a remote location and / or access paperwork from the cloud. Data stored in on-site servers is only accessible at your place of operations.

Additionally, in-house servers are considered more susceptible to ransomware attacks. While the cloud’s regular data-backups will ensure your government data is never lost, data stored in physical servers can be lost permanently by a hack or natural disaster.

Learn more about the benefits in the Cloud vs In-House Servers Guide for Local Government.

What is Microsoft Azure government cloud?

Microsoft’s Azure cloud has been at the forefront of cybersecurity, making it an ideal cloud partner for local governments. GovPilot recently established a partnership with the Microsoft cloud platform to follow in the footsteps of the Department of Defense, the Intelligence community, and other top technical branches of the federal and state governments as a leader in government technology.