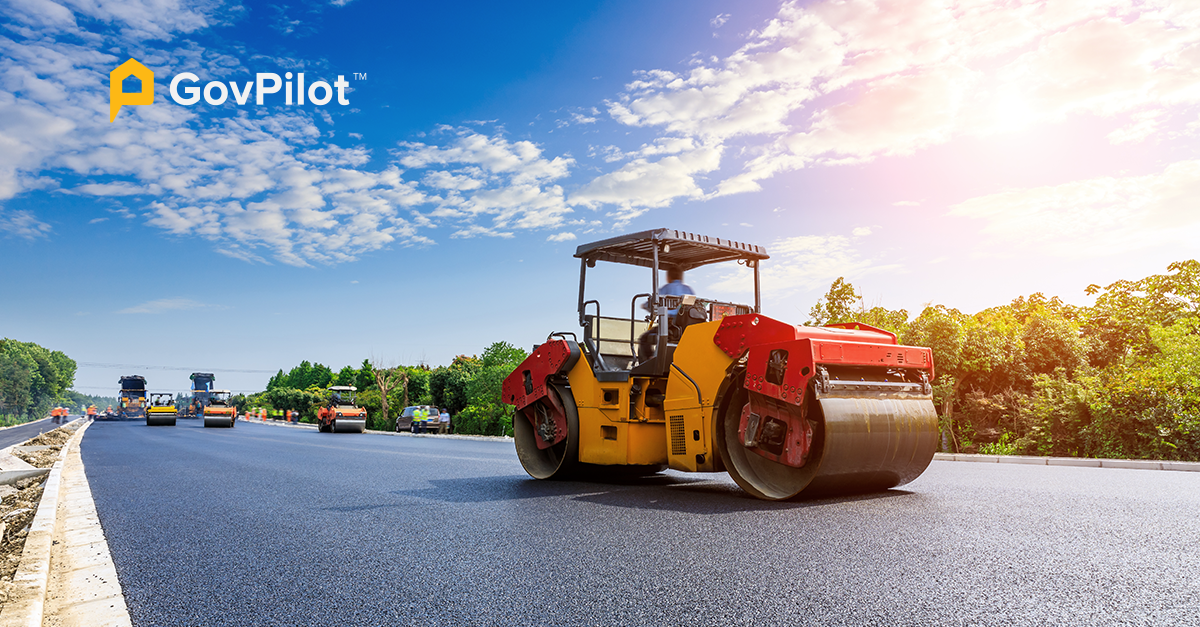 Of all the legislation that has gone through the House and Senate since President Biden’s inauguration, the most publicized is probably the 2021 Infrastructure Bill.

But what is included in that bill? The Infrastructure Investment and Jobs Act packs quite a lot of details about things like public transportation, water and climate provisions, and cybersecurity that will positively impact communities and their municipal governments in numerous ways.

Follow along for more insights into how the Infrastructure Bill will impact your local government, and how funds from the Bill are allowed to be used for your community's physical and IT infrastructure.

What is the Infrastructure Bill?

The 2021 US Infrastructure Bill, officially titled the Infrastructure Investment and Jobs Act, was a bill that passed in both branches of Congress with bipartisan support in August 2021 that will invest $1 Trillion into the United States' physical and digital infrastructure.

The thorough bill includes funding to be allotted towards physical infrastructure like disaster resilient buildings and roads. The digital infrastructure provisions include things like increased broadband access and improved cybersecurity measures.

What Types of Physical Infrastructure Are Covered Under the Bill?

The bill seeks to address many of America's infrastructure issues simultaneously.

Here are some of the ways the bill plans to cover physical infrastructure:

With an understanding that different locations & communities have much different infrastructure needs, funds have been set aside as grants for local governments to leverage in specific use cases. $5 billion has been set aside for National Infrastructure Project Assistance grants, which will allow communities to pursue important projects. Local government leadership will need to apply to be considered for these funds.

Federal funds will be allocated to revitalize desperately overdue physical infrastructure across the United States. That includes (but is not limited to) $20 billion towards large bridges and bridges in rural locations, $5 billion to improve the efficiency and safety of the interstate highway system and roadways, and a $66 billion investment in passenger rail, freight rail, and Amtrak across the United States.

In the weeks since the Infrastructure Bill was approved in the Senate, drought fueled wildfires have spread across California, floods inundated Tennessee, and Hurricane Ida blew through New Orleans, the state of Louisiana, and even inundated cities and towns as far north as Philadelphia, Newark, and New York City.

In the 21st century, resilience has become a major theme necessary to head off the worst impacts of climate change and extreme weather events. With important infrastructure like bridges and tunnels already decades if not a century old, there is a need for critical repairs and the construction of new, more disaster resilient infrastructure across the United States. With the passage of the federal infrastructure bill, regions across the U.S. can take preventative measures against the climate disasters that impact them the most.

To learn more about mitigation actions that can be taken against relevant storms, read on in the GovPilot disaster preparedness guides:

With the White House's plan to increase the number of Federal electric vehicles, it is clear that the administration is paving the way to decrease greenhouse gas emissions by making environmentally-friendly electric cars more accessible for all. $2.5 billion has been granted towards electric charging stations across the nation.

What Types of Digital Infrastructure Are Covered Under the Bill?

The Covid-19 lockdowns shined a spotlight on how overdue municipal governments were for digital innovation. Municipalities that were still dependent on paper and in-person departments came to the realization that the need for digital / remote infrastructure was integral to the future of local government.

The American Rescue Plan provided local governments with funds to address these issues, and the Infrastructure Bill intends to continue moving the needle.

Here is where local government digital infrastructure will be impacted by the passage of the Infrastructure Bill:

As the number of ransomeware attacks against municipalities and businesses continues to increase, the bill includes municipal cybersecurity upgrades to prevent future attacks. In the bill, $120 million was provided to the Department of Homeland Security to support any municipalities impacted by a cyber attack. $1 billion in grant funds have been included to support localities as they develop more robust cyber security plans and trainings. An additional $250 million is meant to be provided to rural community cyber security specifically, and also outlines details of taking specific precautions to protect integral water systems from the threat of cyber attacks.

Increased Broadband Accessibility for All

As a strategy to bring digital equity to all, regardless of location or income, the U.S. Infrastructure Bill will provide $65 billion towards broadband infrastructure, which will increase the nation’s access to the Internet for all citizens.

That means local governments in rural areas with low internet broadband access should see an improvement in internet connectivity and should consider ways to improve their digital processes as a result.

To learn more about how to move your municipality online, read on in our Local Government Digital Transformation guide.

How Should Your Local Government Prepare for the Infrastructure Bill Funds?

With the Bill passing Congress and money being allocated towards infrastructure nationwide, your local government has a lot of work to do to get ready for an influx of federal funds being spent in your community.

Here are some of the top ways you should prepare for the Infrastructure Bill:

With billions of dollars being approved as grants, your local government will need to consider what its needs are and which infrastructure items to prioritize. Consider making a list of all of the infrastructure projects you could consider based on the grants laid out in the text of the bill.

Consider things like roadways, new disaster-resilient construction, public transportation, broadband accessibility, and digital infrastructure and have your government workers weigh-in on how adequate your infrastructure within each category is. Consider the construction of resilient infrastructure not only based on historical records, but what the future might bring in our ever changing world. Tools like Flood Factor to understand both current and future risk in your municipality or county.

Consider leveraging government software as a means to leverage data on things like construction permits, constituent complaints, new business registrations, and countless other aspects of day-to-day life in your community to make educated decisions on what to prioritize.

With the billions being spent on infrastructure nationwide, you can anticipate a lot of improvements taking place in your area in the form of new construction and broadband accessibility.

As a result, you’ll want to have your government workers trained and well prepared to manage a lot of moving parts. If you haven’t already, consider leveraging software to improve internal government processes across the board. This will make your government more efficient, productive, and responsive.

Here are some smart ways to improve your internal performance before infrastructure funds arrive:

You can leverage cloud-based software to ensure that government workers within any department will have direct access to government documents and files that are within their jurisdiction. Save time and keep everyone organized.

New Jersey recently set the tone for digital permitting with the NJ Electronic Permit Processing Review legislation, which will require all NJ municipalities to make the switch online for filing construction permits. This mandate will allow constituents to file permits online 24/7 with simple building permit software and will provide government workers with all necessary documentation.

With government management software, your local government can have an online application for all relevant permits and licenses. That will save time and expedite the process to get construction permits approved as you upgrade your physical infrastructure. Faster permitting equals faster economic development.

With more construction, it is inevitable that there will be more building inspections. You may want to recruit government workers to handle the surplus of needed inspections. Also consider digitized inspection software like GovInspect, which expedites the process and stores relevant data in the cloud, eliminating the need for slow, inefficient paper-based inspections. In a Trenton, NJ case study, inspectors noted saving over 100 hours a week by going digital.

When using modern government management software, all of your municipal data is stored in secure cloud-based servers, meaning you won’t be at risk of losing government data or records due to  a natural disaster or ransomware attack. Consider improving your digital infrastructure now with existing budget or American Rescue Plan Act funds, or requesting grant funds from the infrastructure bill once passed, to upgrade your IT infrastructure with municipal software.

Overall, there are a number of clear benefits for local governments to be excited about with the passage of the U.S. Infrastructure Bill. Soon, you’ll be able to leverage funds to improve your physical and digital infrastructure and increase the quality of life, and economic competitiveness for everyone living within your community.

In the meantime, prepare accordingly by making the switch to government management software. To learn more, book a free consultation.

What is the US Infrastructure Bill?

The Infrastructure Bill is legislation approved by Congress that will allocate $1 Trillion towards improving physical and digital infrastructure in the United States. Local governments will be able to apply for grants to meet their specific infrastructure priorities, and can also expect to see improvements to things like broadband internet access, highways, major roads and roadways, and bridges that are currently in poor condition.

What Types of Infrastructure Are Being Addressed with the Bill?

How Will the Bill Impact Digital Infrastructure?

The bill is allocating funds toward broadband high-speed internet and cybersecurity that will allow for municipal governments to move to a more online-oriented system of governance.