Government Blockchain: How Local Government Can Use Crypto in 2022 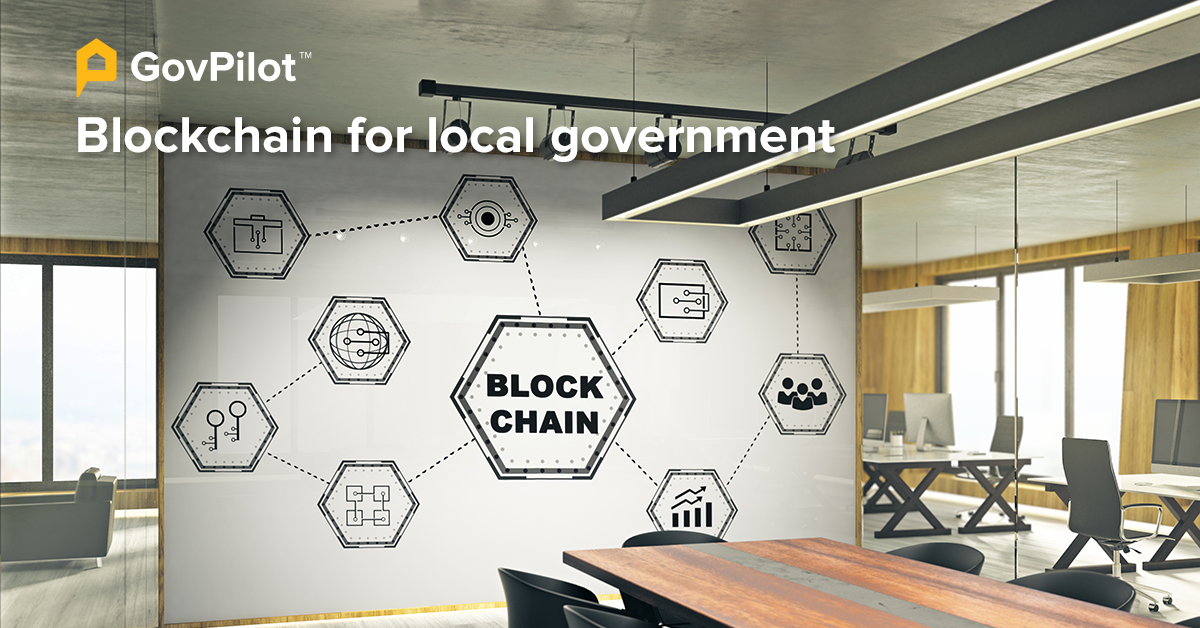 As state and local governments continue to rapidly adapt and innovate as a result of stimulus money and government management software, many government leaders across the United States are thinking of additional ways to keep up with modern innovation trends.

Like millions of Americans, many government officials are hopping on the bandwagon with one of the most innovative pieces of technology to evolve in the last decade: blockchain.

Even if you don't think you know about blockchain, you probably do. Popular cryptocurrencies like Bitcoin, Ethereum, and Chainlink function as a result of and provide connections to the blockchain, are seeing continued growth in value and popularity like never before. Bitcoin and Ethereum - the two most well-known cryptocurrencies, and largest by market cap - have seen substantial growth too, up 754% and 1285% respectively over the past year. Bitcoin has become an attractive option for institutional investors as a store of value similar to gold, and several major corporations including BNY Mellon, JP Morgan, Mastercard, Microsoft, and Visa are exploring decentralized finance - DeFi - and are utilizing the Ethereum network to develop smart contract platforms.

Another sign of growing interest in cryptocurrency - warranted or not - is Dogecoin (a coin originally created as a joke with no real world application) which skyrocketed in April 2021 from being worth $.06 to over $.42 overnight.

As exciting as these developments may be, it can be challenging for municipal leadership to understand the vast potential of blockchain technology and the future use cases that exist for local government.

Learn more about where blockchain and cryptocurrency play a role in government digital transformation, and how your local government may be taking advantage of it in the near future.

What is Blockchain in Government?

In government, blockchain can be used in a variety of ways. As more local governments are making a digital transformation and setting up online payment offerings, they can consider accepting various decentralized cryptocurrencies as payment for things like permitting and online real estate auctions. Perhaps more exciting, governments can take advantage of blockchain applications for public record security, increased civic engagement, time savings, efficiencies in services, and crime reduction.

What Are Some Ways Local Governments Can Use Blockchain?

Here are some of the ways your local government can utilize the blockchain:

Since the beginning of the COVID-19 lockdowns, constituent services like filing permits and paying fees to local governments have shifted to a mostly digital format. Most likely, after the pandemic, constituents are going to still want the convenience of being able to do these things from their home computer or mobile phone.

Local governments can consider accepting payments with cryptocurrencies like Bitcoin (BTC) and Ethereum (ETH) now that they have moved to a more digital infrastructure. Allowing constituents to pay for their local taxes and fees (and potentially even homes purchased in online real estate auctions) via crypto. These so called, “smart contracts” can be a win-win for both the local government and the constituent, because payment via cryptocurrency creates an immutable record of the transaction.

Chainlink, a "decentralized oracle network" provides reliable, tamper-proof inputs and outputs for complex smart contracts on any blockchain. Among many uses, the technology can be used to track real-world data such as weather patterns, and trigger an automatic pay out of contracts, such as an insurance policy that a municipality holds if specific conditions within the contract are met. For example, Chainlink would monitor temperature and precipitation data from a live NOAA feed and would facilitate an instant, automatic cryptocurrency payout to a city that holds a smart contract insurance policy against flooding, power outage, or sustained abnormal temperature fluctuations, such as we recently saw during the Texas winter storm. 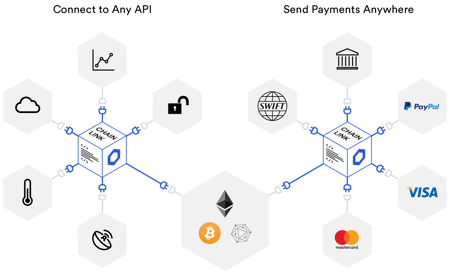 Use Blockchain for Public Record Security

Blockchain is designed to track transactions and keep vital information easily accessible to those who need it while remaining inaccessible to hackers or other bad actors.

Better IT security will improve trust of community members in their local government and can increase civic engagement due to the trust created.

Use Blockchain for Storage of Data

As government innovation continues to advance and local governments digitize their work processes, they’ll be receiving more insightful data than ever before.

Your local government will likely be receiving substantial funds in the near future as a result of the American Rescue Plan Federal stimulus funds. Your spending data will be especially important to pay attention to as it is allocated in your budget over the next few years.

Securing this data with blockchain is a wise way to ensure it doesn’t get lost and will remain privately accessible.

How Are Governments Currently Using Blockchain?

Blockchain wields the power to transform local government for years to come. In some places, they are taking advantage already.

The mayor of Miami, Francis Suarez, is actively leading the charge to bring Bitcoin to South Florida as a means to fuel tech innovation in the city. In the near future, the city hopes to leverage the cryptocurrency to pay government employees, and to collect fees and taxes.

Reno, NV mayor Hillary Schieve showed open arms for oracle blockchain provider Chainlink. The platform is designed to integrate and store physical data such as real estate contracts seamlessly using blockchain so that those with permission can access data with ease and without the threat of one party altering the contract. The technology keeps an automated log of changes to documentation and data, keeping transparency integral to the documentation being accessed in the cloud.

Mayor Scott Conger recently announced that he will create a taskforce to explore the feasibility of implementing a blockchain system as a way to record transactions such as tax payment and the payment of employees. Additionally mayor Conger sees potential in blockchain as a tech job creator saying, “I think when we talk about 21st century jobs, we talk about 21st century businesses. The city itself, we have to show we are ready to welcome those businesses to Jackson.”

Recently the Oracle blockchain provider, Chainlink, held a “Hackathon” which included a GovTech category to develop innovative ways for local governments to utilize the blockchain to improve services. One of the winners utilized Chainlink to determine an optimal rate for public transportation services given varying ridership volumes. This would ensure that the price to ride public transportation reflects the demand for services at the time, evening out costs and revenue for municipalities and encouraging riders to distribute their ridership times.

In China, the government has established a digital yuan, which will be used to replace some paper cash in circulation. The overall goal is to innovate on cashless payments, and the country is currently considered the most advanced at doing so in 2021.

Overall, it’s clear that the world is moving toward a more digital format. While it is still quite early in the adoption phase, blockchain is almost guaranteed to play a vital role in technological innovation for years to come.

Even if it takes some time for blockchain to become a staple of local governments everywhere, it never hurts to think big and consider some of the ways that communities can continue to innovate as the world recovers from the pandemic. Even a small pilot initiative can inform broader and deeper implementation in the future.

Will your government be accepting Bitcoin or Ethereum as payment for permit and zoning fees? Will you invest in cryptocurrencies as part of your employee pension program? Can you secure your public records and data with blockchain? Set public service pricing based on real-time user data? It all may be sooner than you think!

Interested in making your local government services and operations more efficient through digital transformation? Get a free demo! We look forward to speaking and learning about your goals!

1. What is blockchain technology?

2. How can blockchain be utilized by local governments?

Some local governments and their leaders are beginning to explore uses for the blockchain and various cryptocurrencies for things like payment for services, taxes, and employee payroll. Other uses include the secure recording of transactions such as property sales, or even the setting of public transportation pricing based on real-time system usage. Some cities, such as Miami are even exploring incorporating crypto investing into employee pension funds. Still, these are the early days of blockchain technology, but it hold the potential to transform municipal, county, and state operations and services.

3. How can local governments get started with or pilot a blockchain initiative?

Blockchain technology, cryptocurrencies, and smart contracts are still very new but hold enormous potential to transform entire industries and local government. If you are interested in or have a potential use case for blockchain technology, it is critical to do your research. We recommend reading and reaching out to Consensys, the developer of the Ethereum blockchain. Consensys provides significant resources and research into uses for governments. Additionally, Chainlink, the blockchain oracle provider that connects real world, physical items such as contracts to the blockchain, is a fantastic resource. It recently added a "GovTech" component to its hackathon where new uses for governments were explored.