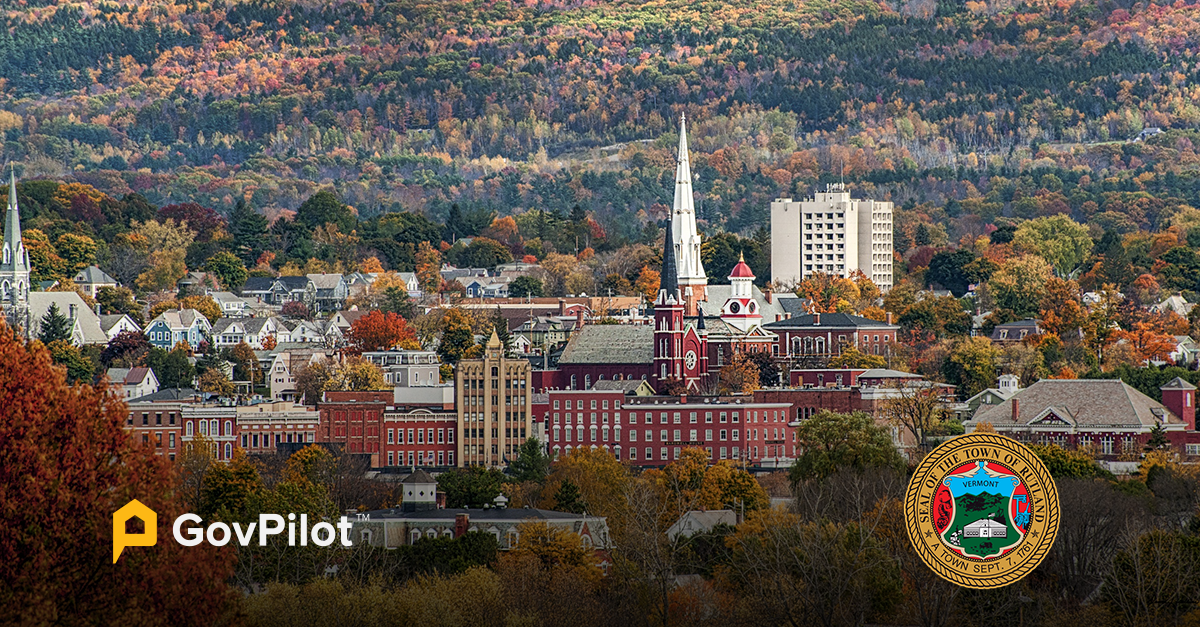 Rutland City, Vermont., January 13, 2023 - A transition from paper to digital processes is underway in Rutland, Vermont where local officials have sought greater efficiency in municipal operations and constituent services. The City recently partnered with GovPilot, a New Jersey based provider of cloud-based government management software.

Officials from Rutland have been working with, and are continuing to work with, GovPilot to implement a number of digital capabilities and public facing forms that aim to make operations more efficient and services more convenient for constituents and visitors to the picturesque municipality of 15,000 in Vermont’s Green Mountain region.

“GovPilot is a cost-effective platform that is enabling us to deliver modern government services.”

The municipality has deployed GovPilot’s Report-a-Concern feature which enables residents to report non-emergency concerns such as potholes, unsanitary conditions, or general code violations directly via a digital form on the township website, or through an app on their phone, called GovAlert. The app, available to residents on Android and iOS devices, is easy to use and routes citizen concerns directly to the relevant municipal department so that the issue can be resolved quickly.

Andrew Strniste, Rutland’s Planning and Zoning Administrator said, “I encourage residents to download the GovAlert app on their phones and help us improve Rutland by reporting non-emergency-related issues that they come across so we can address them quickly. Digital government services are essential to cost effective public safety and services, and we aim to be responsive to our residents and visitors.”

“We have been thrilled to work with GovPilot thus far. Prior to GovPilot we relied on archaic, time-consuming paper forms and processes in the Building and Zoning Department. The digital workflows that we have now made available to our residents and to our staff are expected to make a night and day difference in convenience and efficiency. GovPilot is a cost-effective platform that is enabling us to deliver modern government services,” added Strniste.

Michael Bonner, the founder and CEO of GovPilot said, “We are excited to work with Rutland on its early stages of digital transformation. Federal funding from the American Rescue Plan Act has spurred local governments to implement digital services and operations. In partnering with local governments across the country we have found that digital processes generate significant increases in efficiency and productivity that have a positive impact on local budgets, services, and constituent experience. We expect to see similar results in Rutland.”

This press release appeared on Globe Newswire on January 13, 2023.

GovPilot - named a GovTech 100 company for six consecutive years - is the leader in digital transformation for local governments. GovPilot's cloud-based platform was built with the sole purpose of enabling local governments to operate at their full potential by standardizing, digitizing, and unifying more than 100 operational and constituent service processes on one system.