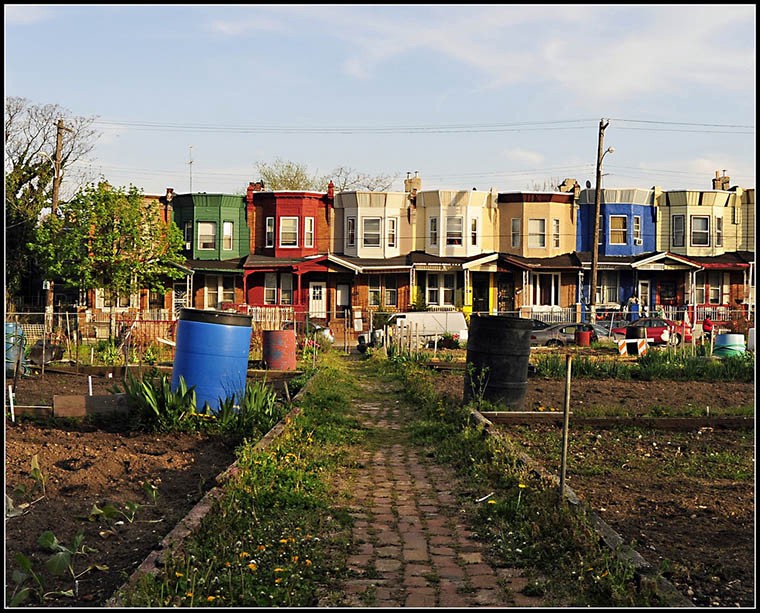 Last week’s Earth Day-themed blog post touched upon the concept of the community garden: a public plot of land maintained by a city’s residents. In recent decades, the prevalence of property blight has reignited interest in this age-old concept. Vegetation has sprouted in place of asphalt in United States cities from Detroit, Michigan to Jacksonville, Florida. This week’s post digs a bit deeper to explore the roots and reach of this increasingly popular use of vacant property.

The concept of a communal garden is an ancient one and its practice in the United States predates the nation itself. Native Americans tended crops as a tribe and other early American community gardeners included residents of Brook Farm — a Transcendentalist utopian living experiment in 19th century Massachusetts.

Approaching the turn of the century, an industry boom caused millions of Americans to flee to US cities. Land that wasn’t dedicated to housing or office buildings was largely reserved for commercial farm use. On hiatus in times of economic prosperity, the community garden would reemerge nearly two centuries later in response to economic decline.

The 1970s were marred by a worldwide recession — a fact evidenced by the decay of large stretches of New York during this period. A previous GovPilot article discusses the rubble that covered Charlotte Street in the South Bronx (begins on page 12) and Manhattan neighborhoods including Hell’s Kitchen, East Harlem and the Lower East Side were ravaged by vacant lots left after the demolition of abandoned buildings. This last neighborhood became the site of the first modern-day community garden.

In 1973, the aptly named environmental nonprofit, the Green Guerillas, began tossing “seed bombs” over fences surrounding the Lower East Side’s many vacant lots. Filled with fertilizer, seed and water, these bombs were part of the Guerillas’ larger mission to beautify the blighted city.

When not dropping seed bombs, the Guerillas focused their efforts on a vacant lot on the northeast corner of Bowery and Houston streets. The group spent a year adding topsoil, erecting a fence and otherwise transforming this clear sign of blight into fertile ground.

New York officials took notice. In April 1974, the City Office of Housing Preservation and Development approved a lease for $1 a month for the “Bowery Houston Community Farm and Garden”.

From Vacant to Verdant

Today, Manhattan boasts over 60 community gardens and other US cities have followed suit. The community garden is more than a green oasis in a desert of concrete. It’s a source of pride, a safe haven and a step toward revitalization.

Examples abound. In the 1980s, North Philadelphia, Pennsylvania’s Norris Square district was consumed by drug-related crime and vacant, rundown buildings. That is, until, a group of neighborhood women reclaimed a vacant lot and established the Las Parcelas Community Garden. Murals provided a vibrant backdrop for the garden’s rows of organic herbs and vegetables.

This splash of color created ripples that brightened other areas of Norris Square. Locals cleaned graffiti, enrolled their children in gardening classes at Las Parcelas and began to take pride in their neighborhood.

The findings of a study conducted by Texas A&M University provides further evidence of the community garden’s potential to improve life in underserved districts. Researchers plotted the amount of green vegetation in Austin, Texas on a geographic information system (GIS) map to determine an average percentage of greenery for the city. They then compared a neighborhoods’ percentage of green areas to its crime rate.The researchers found rates were lower in areas with an above-average amount of greenery and vice versa, regardless of residents’ income levels.

The establishment of a community garden provides residents with a beautiful view, organic food and a reason to come together. GovPilot’s digital Community Garden application and associated automated workflow makes this rewarding undertaking more attainable than ever.

Clients place a digital application form on their official website. Through the form, civic-minded gardeners can request that a plot of land be reserved for a community garden. The form prompts them to provide local officials with all relevant information.

An automated workflow carries the request through the appropriate internal channels to produce a swift, definitive answer. Once approved, volunteers can start preparing the soil to sow the seeds of rehabilitation.

After the garden has been established, forms can be customized to allow residents to register as gardeners, reserve a patch of private soil within the garden and otherwise contribute to a gift that keeps on giving.

GovPilot is committed to helping local government manage vacant and abandoned properties to bounce back from blight. Some clients choose to auction foreclosed upon properties to responsible homeowners. Others choose the aforementioned community garden route. GovPilot offers the versatility and strength to guide communities through their preferred path.

How Online Real Estate Auctions Can Help Revitalize Neighborhoods In 2021