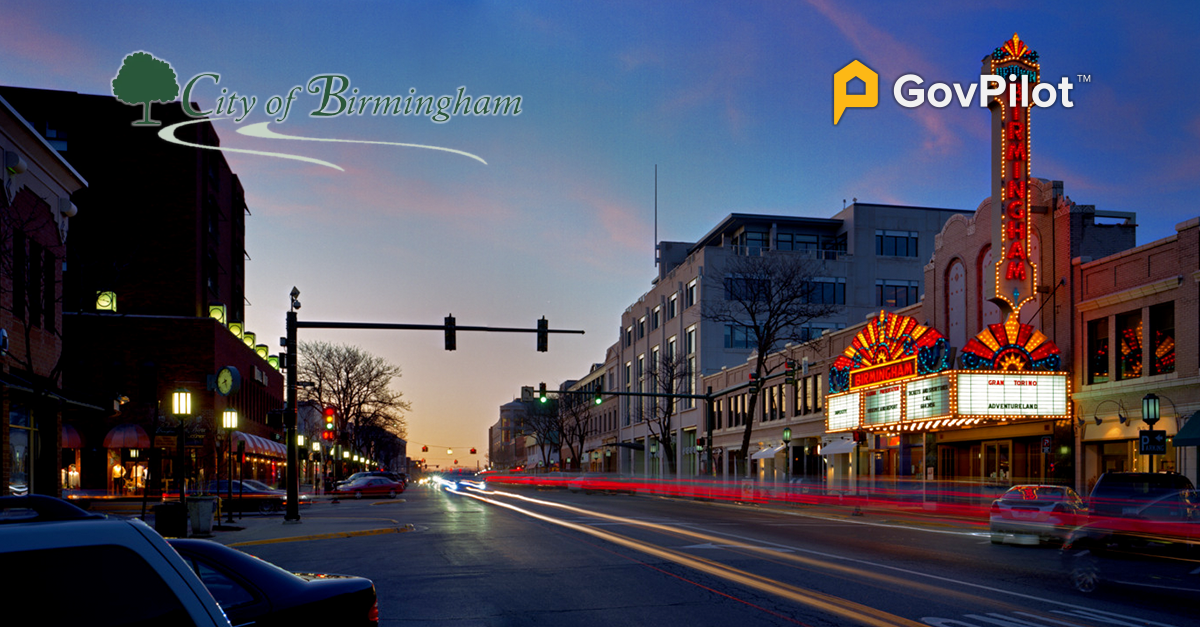 Birmingham, MI., January 7, 2022 - A transition from paper to digital processes is underway in Birmingham, Michigan where local officials have sought greater efficiency in municipal operations and constituent services. The city recently partnered with GovPilot, a Hoboken, New Jersey based provider of cloud-based government management software.

“We are very excited to make this convenient digital service available to our constituents."

Officials from Birmingham will work with GovPilot to implement digital workflows that will make operations more efficient and services more convenient for constituents. Officials will initially utilize GovPilot for non-emergency constituent concern reporting.

Birmingham will deploy GovPilot’s Report-a-Concern feature which enables residents to report non-emergency concerns such as potholes or general code violations directly via a digital form on the city website, or through an app on their phone, called GovAlert. The app, which will soon be available to residents on Android and iOS devices, is easy to use, and routes citizen concerns directly to the relevant municipal department so that the issue can be resolved quickly.

“We are very excited to make this convenient digital service available to our constituents and to partner with GovPilot on this important upgrade to city services,” said Marianne Gamboa, Birmingham’s Communications Director. “Residents will be able to download the GovAlert app on their phones and also submit concerns directly on our website at bhamgov.org.”

Michael Bonner, the founder and CEO of GovPilot said, “We are excited to work with Birmingham on its early stages of digital transformation. Federal funding from the American Rescue Plan Act has spurred local governments to implement digital services and operations. In partnering with local governments across the country we have found that digital processes generate significant increases in efficiency and productivity that have a positive impact on local budgets, services, and constituent experience. We expect to see similar results in Birmingham.”

This press release appeared on PRNewswire. Read it here.